Being scared is part of being truly alive. Accept it. And walk through it. You are larger than your fears + bigger than your doubts. – Robin Sharma –

I am considered the crazy one; if not the craziest, among my friends… lol. If they don’t hear anything from me in a span of days or weeks, they would assumed I am off somewhere plotting something extremely-insanely-disturbing ideas or doing foolish stunts in awkward places [can’t blame them though]. They will then expect me to be back with a totally hilarious stories of my misadventures, or worse; off to another place shooting outlandish plans, questioning the status quo, disrupting the comfortable; familiar equilibrium, including not sleeping for 24 hours straight and still opt to jump out of a plane; somewhere at 13000 ft above the ground, the next day.

Skydiving has always been my ultimate bucket list, and the thought of being able to tick it off from my list entice me more.

So amidst the ongoing hustle bustle,  before my adrenaline-fueled mind get in the way of sharing my experience in full detail; brewing another dangerous stunt, let me take you back to Skydive Dubai…

I don’t think there is anything better than The Palm Dubai as a drop zone; which is evident on my pictures below, the jaw-dropping, breathtaking view of the palm.

This is the usual scenario upon entering the vicinity of Skydive Dubai . Once you get inside, you will immediately feel a different atmosphere, with everyone minding their own business; preparing for the death-defying-fun-filled-action-pack adventure, my excitement started to kick in.

First things first, you will have to approach the reception to verify your tandem dive schedule, process payment and check who will be jumping with you.

Many thanks for this shot taken by cupcake, I will never forget the names of my first skydive team. [wide grin here]

Being high on adrenaline [but a lot higher with haughtiness I guess], went on to signing the waiver that states all the different possibilities of dying in mid-air; without them being held responsible, altering the words not to appear traumatic that would potentially scare you away.

FYI. If there is one thing that will desperately convince you not to dive, it’s the waiver! – It would make you run back home to Mom.  It was insane though, every page essentially said “you know that you are about to do something that can cause you great harm or worst kill you, and you are choosing to do it on your own accord.”  and there I was; being driven with so much excitement, signed each and every single page blindly. No remorse! and what did they say about the forbidden charm?

For those who are skydiving for the first time, you’re probably doing a tandem dive, where in you will be strapped to your tandem partner whom you’ve entrusted your fate for the next 45 minutes [it’s as if you have a choice] and you will be crossing your fingers hoping they won’t decide to just throw you off the plane unaided. [evil-laugh]

Seriously though, you’ve got nothing else to worry [aside from the butterflies in your stomach] because your tandem partner will be doing most of the work all the time; which apparently what you’ve paid for, and then gravity takes care of the rest.

I am well-informed, aware of the dangers that goes hand in hand with it. But I am more thrilled about the fact that finally I am doing something I have always dreamed of and decided that there’s no way fear will going to stop me. Then off we go!

When the plane finally took off, the whole thing became somewhat surreal… and before you know it, we’re in the air quickly climbing to our target altitude of 13,000 feet. 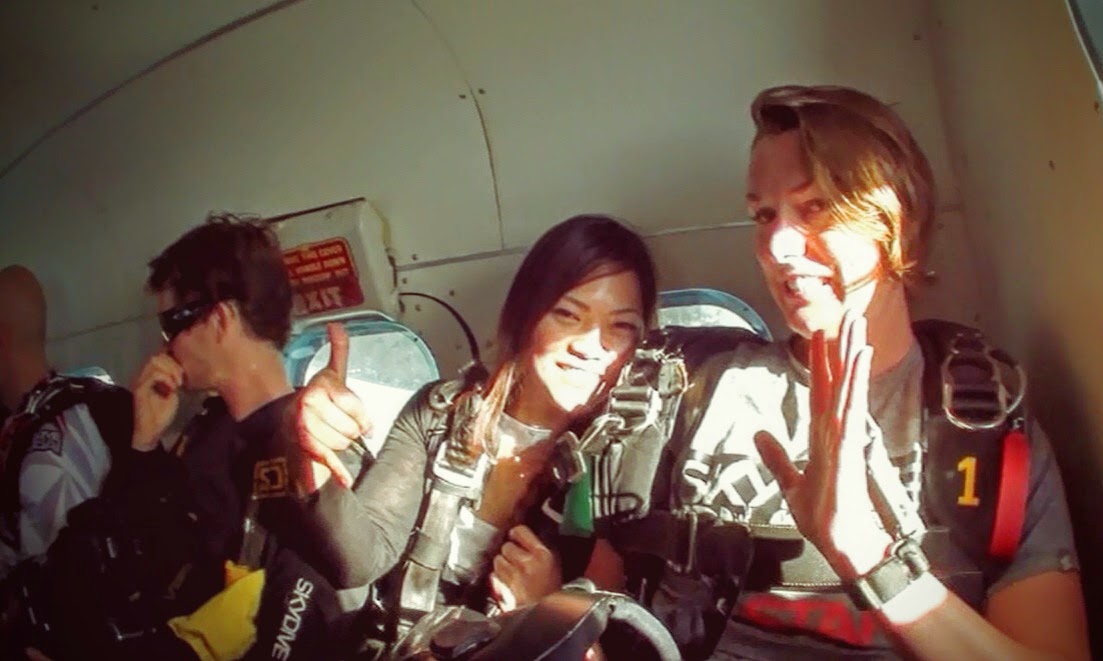 The first thing you’ll notice up there is that even in the heat of the mid-eastern sun; it’s way colder up in the clouds. We were seated near the pilot while cupcake’s taking videos of us in between interviews which unlikely of me to understand and just nod in return.

We were the last tandem to jump out of the plane [resenting the idea being the only girl on board]; looking at other jumpers making their way to the edge of the plane ready to plunge in, while my tandem partner is trying to tell me something but it’s kind of loud with the airplane door wide open.  and that’s when you realized your partner jumps out of the airplane and you are stunned; mouth wide opened in total bewilderment. 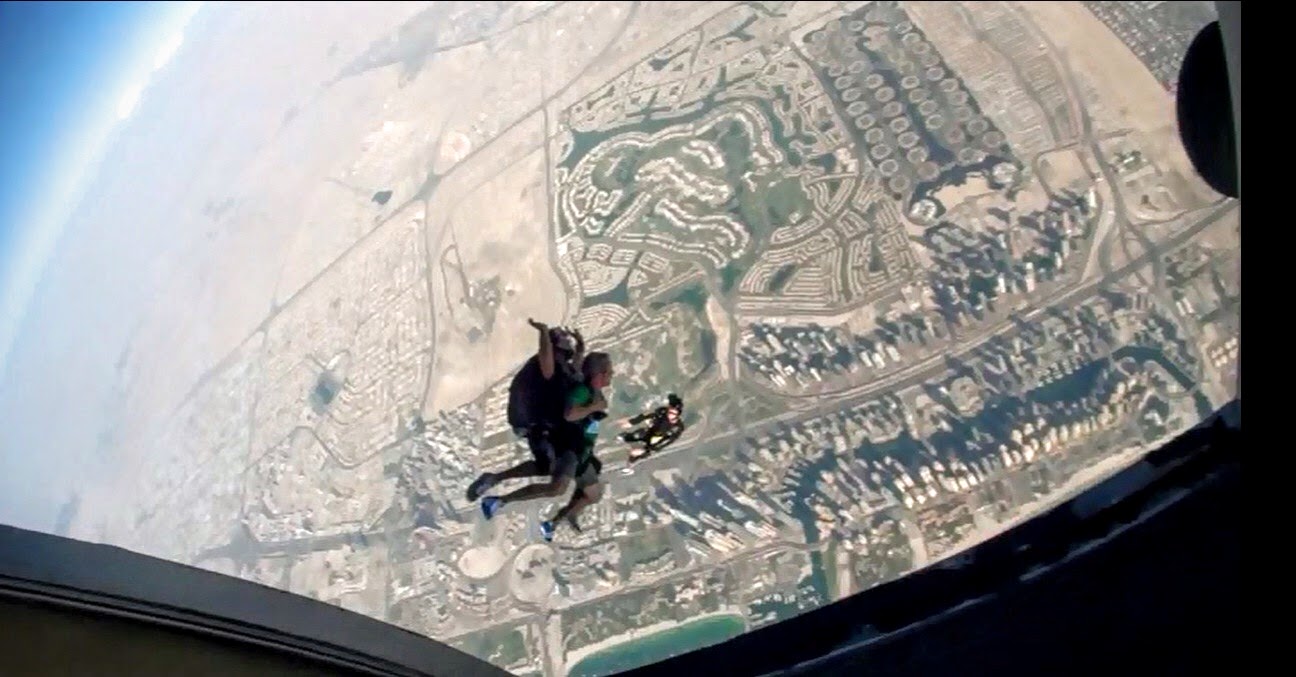 My stomach started to contract, my partner mumbled some instructions but he was barely audible amidst the plane rumbling and my heart threatening to burst open. As soon as we jumped though, the whole experience shifted into ecstasy. We were plummeting at over 120 miles an hour. 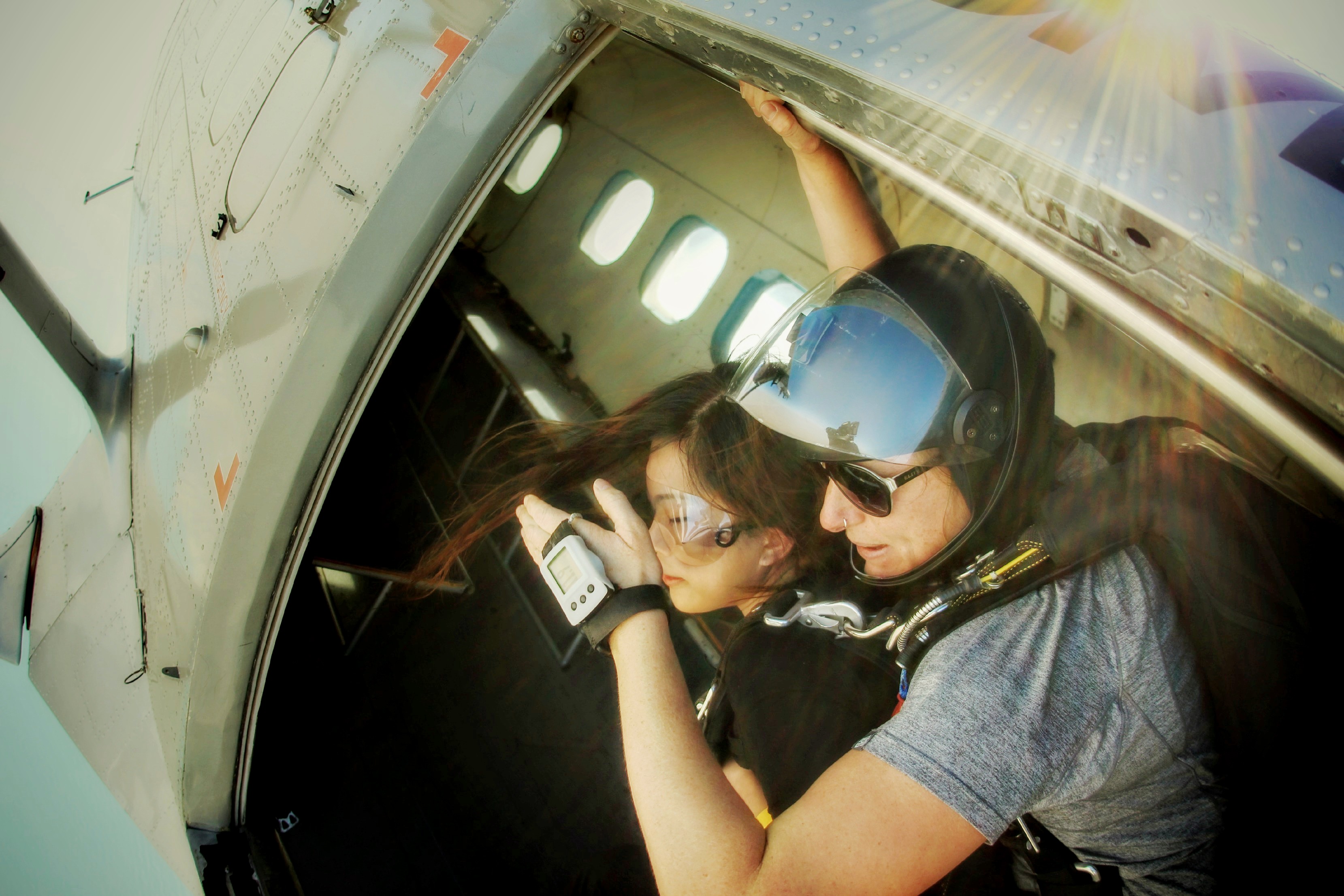 All I knew when I pushed myself to the edge of the plane, dangled our feet, resisting all defensive instincts, the feeling is both terrifying and awe-inspiring.

Then came the craziest part, although I am well aware of falling, the Earth is getting very close very quickly, and somehow you’re frightened of the possibility that your skydiving partner can’t pull the parachute soon, and you will die.

But then the parachute opens, and you realize you’re still alive, and the whole thing actually becomes pretty cool. Ha! Ha! Ha!

A feeling of awe took me over as I looked all around and saw the breathtaking view of the palm and the earth below me.  It was one of the best experiences I have ever had.

When the parachute eventually pulled open, there was a lot of jerking and disorientation. It was very unsettling at first, and just as suddenly I found myself suspended in the air, enjoying the silence and the beauty all around me. 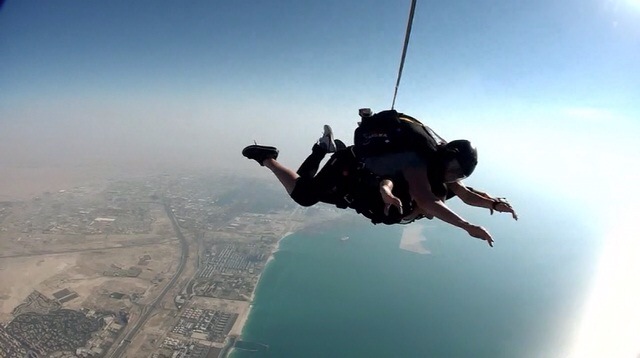 Yay! I even get the chance to steer our parachute… 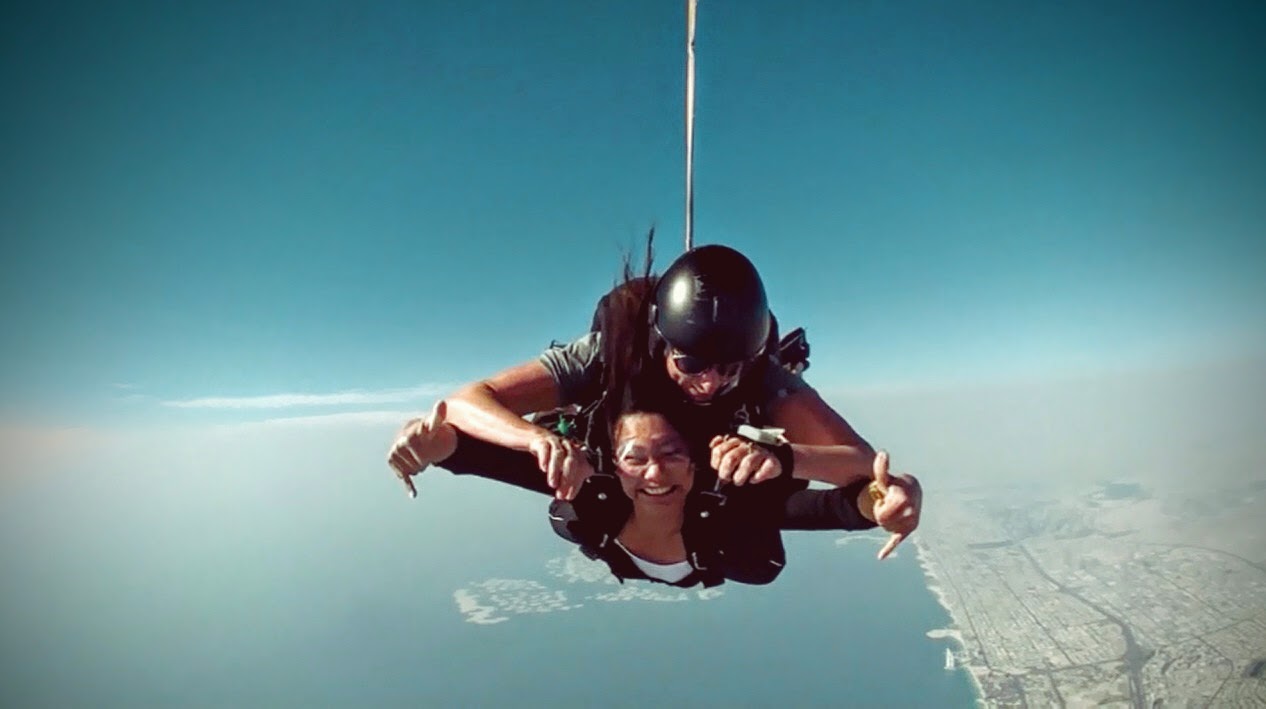 One of the underrated parts of skydiving is the few minutes after free-fall. The parachute opens, and you’re just soaring through the air looking at whatever’s around you.

The view is astonishing, so you might as well skydive someplace with a truly great view. In my case – Dubai is the best place to do it!

Free fall seemed to be the scariest part in the whole diving experience. I couldn’t have been more wrong. It is actually the anticipation of the fall that nearly kills you. The actual fall was over in a fraction of seconds, and it wasn’t even close to the butterflies I felt when I ride the Formula Rossa. 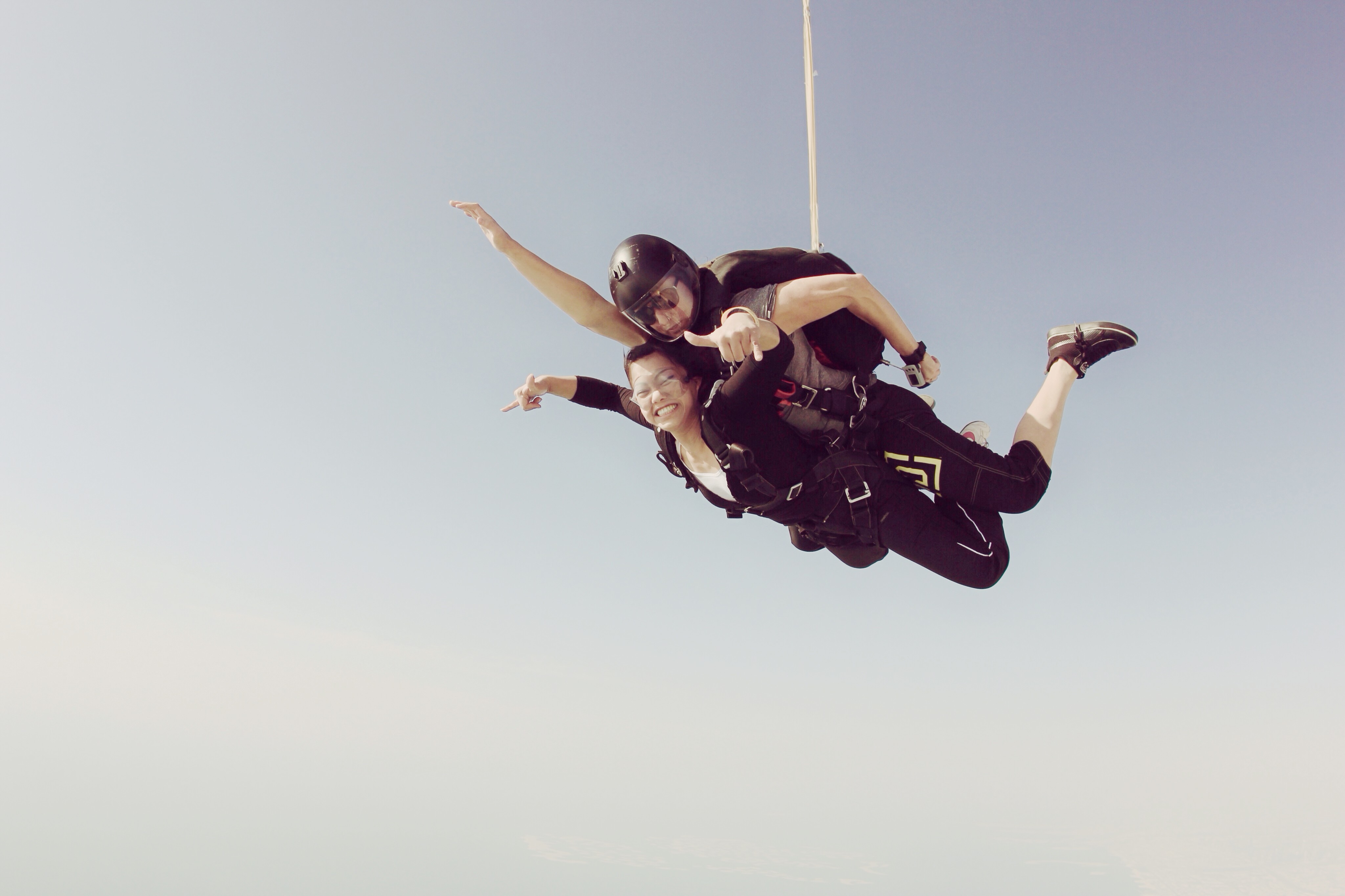 You know what is really disorienting? It’s the part where you ride into the sky in a tiny aircraft that looks as if it will collapse anytime soon and by the time you reached your skydiving height, you will be more than excited to leave that airplane for the safety of a parachute. and once you are in the plane – you will going to come down one way or another, and most importantly, they have already charged your credit card, so you might as well jump.

As we slowly began to descent, I felt like it had all ended too soon: the teeth-clenched jump, the silent scream that you tried to hide because you want to be perceived as a cool person, the wind blowing through my hair like a tornado, and finally the tranquility of the glide.

With all due respect to my skydiving partner; doing all the hard work, this person’s job is to throw you out of an airplane without letting you die, which is somehow even harder than it sounds. Kudos to all jumpers who dare pushing the boundaries, conquering their fears, inspiring people to pursue their passion.

Then there’s you taking photos with your skydiving partner, all of which involved hand gestures [pardon me], that you will regret right after you’ve received your copies and saw how awfully disgusting it looks. [Uuuuuuuuggghhhh]

For once, I felt like I’m close to being invincible. the closest thing of saying… I COULD FLY!

Everything about skydiving amazed me. It’s incredibly fulfilling and I have spent the next couple of days thinking how insane free-fall was, daydreaming about it… and then the thought of whether or not I should do it again… 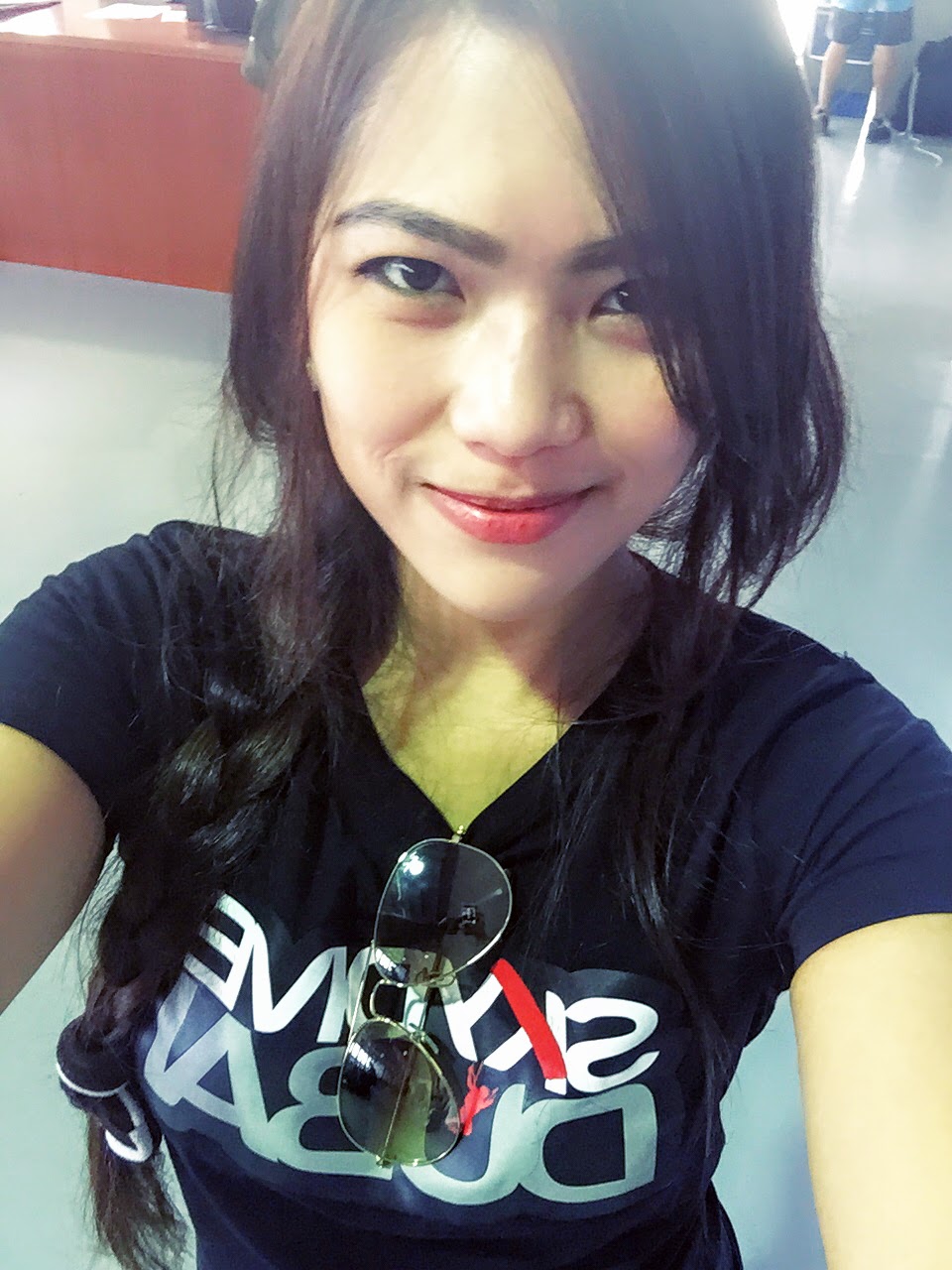 Given that there is no way to avoid the fright that comes in doing something new and scary for the first time, I decided to skydive again.

And so off I go for the second time around with my sibs.

The most important thing we realized is how fear steals our ability to remain present and fully experience every precious moment of life. 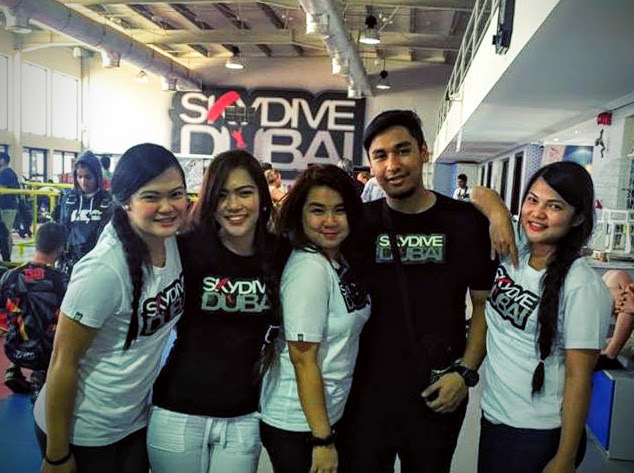 Don’t let fear prevent you from experiencing and living your life to the fullest.

For those interested to take their biggest leap, you may check their website for full details. Link here Skydive Dubai

Till our next adventure! xoxo

“Feel the fear… be afraid… and do it anyway. – Sir Richard Branson

Welcome to my LIFE!

Hello there beautiful person! I'm Wendy, your go to person when it comes to being a bat shit crazy! :-P

I am an Incurable Optimist. Aspiring Philanthropist. Certified Adrenaline Junkie. Rockstar Wannabe. Struggling Entrepreneur. Corporate Slave by day. Wishful Blogger by Night. 24/7 Proud Mom of 3 Misfits, and a Forever Wife to my Superman.

I love Variety and everything about Life interest me… This blog is somehow created to balance the opposing nature of my personality and to work in harmony with the far too many subjects that triggers my curiosity.

I want to share with you the ups and downs of my own ventures [and my misadventures], what motivates me to do what I do… the imperfections and the challenges that comes with [trying] living in the fast lane… with the hope that you too could benefit from it.

So, If you're in for unfiltered, unstaged, raw and real life experiences [even the not so fun part of it], feel free to follow me and subscribe to my emails below for real tips on how to be bat shit crazy! lol.

Sit back. Relax. Stay with me for a while. Cheers!