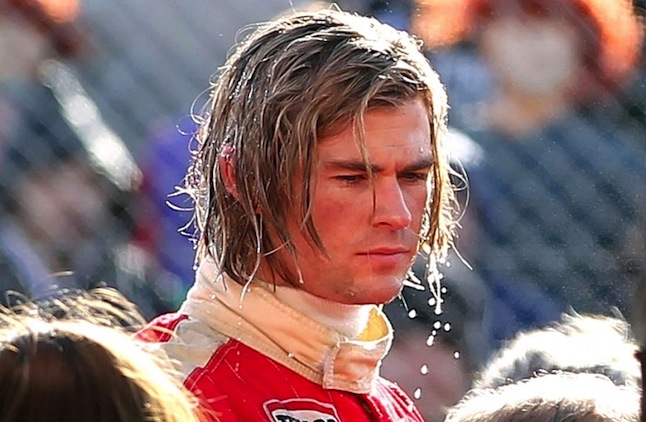 I must admit that at first, the only reason why I sought to watch this movie is because Chris Hemsworth’s in it. Being a BIG fan of the Aussie actor, I was so excited to see the transformation of him from a Nordic God to a daredevil-race car driver. I end up liking the film more than I should and gained a rather unusual obsession with the real life heroes behind it. [Not even a thought of writing something about it]

Although I am a bit of a Car enthusiast myself and have occasionally watched F1 seasons, my knowledge is only limited to Vettel and Schumacher with no intentions whatsoever of furthering that knowledge to the history of racing.

But the moment you start watching the film, it just feels like you can’t get enough of it and you want to watch it over and over again.

Rush portrays the exhilarating true story of two of the greatest rivals the world has ever witnessed; the handsome English playboy Hunt and his methodical, brilliant opponent, Lauda. Set against the sexy and glamorous golden age of Formula 1 racing, the film follows the two drivers as they push themselves to the breaking point of physical and psychological endurance, taking us into their personal lives on and off the track, where there is no shortcut to victory and no margin for error. If you make one mistake, you die.

The rivalry between two extremely different personalities and approaches to racing – Niki Lauda being deliberate and plays by-the-numbers, while James Hunt is cavalier and unpredictable.

Considering the subject matter, Rush delivers the expected visceral jolts; what’s surprising is how endearing it is, even when its two protagonists are behaving like little more than boys with very fast toys.

Both experience highs and lows professionally and personally. There is no one best approach to a successful career, and whatever path you take will have its ups and downs.

As much as I am fascinated with their real life stories, one thing that triggers me on writing it is the leadership/business lessons it teaches us… Below are the excerpts from an article I’ve read…

There is more than one way to a goal
Lauda catapults to the highest level of racing, not by winning races at the lower levels and working up, but by paying to join a team. He then proves his value once in the door and becomes the lead driver. Lauda also isn’t just a great driver physically, but he understands the technology behind the vehicle and refines how the car is made and adjusted, giving him an even greater advantage. There’s more than one route upward. Find all the ways you can attain a career goal.

You don’t have to like everyone you work with
Lauda and Hunt were fierce rivals whose competitive animosity for each other propelled each to loftier heights. They never got close personally, but absolutely benefited each other professionally. You don’t have to love your boss. In Sylvia Ann Hewlett’s excellent career book on sponsorship, you don’t even have to love your sponsor. You just need to recognize when good work is being done, and take what learning or inspiration you can from that.

Likeability matters
While you don’t have to like everyone you work with, it does help to be likeable, especially when you need to influence or persuade. Lauda learns this the hard way when he lobbies for a race change and doesn’t get it (to say more would be a spoiler). What I can say is that Lauda’s argument was arguably the correct one, but his brash, cold delivery didn’t enroll his audience. Hunt’s likeability won the day to disastrous consequences.

Stay true to your values
Lauda takes a play-the-percentages approach. He repeats several times in the movie that racing entails a 20% risk of death, and no more iis acceptable. When he doesn’t stay true to his own beliefs, he suffers. You may be tempted in your career to take shortcuts or to follow an approach that isn’t you. Stay true to your values, so that regardless of the outcome, you won’t second-guess yourself or carry regrets.

Sustainability matters
Hunt seemingly has all the fun – not working nearly as hard as Lauda and yet enjoying spectacular success. In the epilogue, however, you learn that Lauda had the longer, more consistent career. He also had the longer personal relationship. When managing for career and life success, you want to plan for sustainability, not just the quick but short-lived success.

Welcome to my LIFE!

Hello there beautiful person! I'm Wendy, your go to person when it comes to being a bat shit crazy! :-P

I am an Incurable Optimist. Aspiring Philanthropist. Certified Adrenaline Junkie. Rockstar Wannabe. Struggling Entrepreneur. Corporate Slave by day. Wishful Blogger by Night. 24/7 Proud Mom of 3 Misfits, and a Forever Wife to my Superman.

I love Variety and everything about Life interest me… This blog is somehow created to balance the opposing nature of my personality and to work in harmony with the far too many subjects that triggers my curiosity.

I want to share with you the ups and downs of my own ventures [and my misadventures], what motivates me to do what I do… the imperfections and the challenges that comes with [trying] living in the fast lane… with the hope that you too could benefit from it.

So, If you're in for unfiltered, unstaged, raw and real life experiences [even the not so fun part of it], feel free to follow me and subscribe to my emails below for real tips on how to be bat shit crazy! lol.

Sit back. Relax. Stay with me for a while. Cheers!